Are Americans (and Canadians) eating themselves to death

Are Americans eating themselves to death? After spending time in the U.S., it’s a question worth asking. It’s no secret that obesity rates in the United States have ballooned in recent decades, and while issues surrounding obesity are complicated, it seems a culture of gluttony can partially be blamed for the increasing waist lines of Americans. Simply, Americans consume too much food, and don’t exercise enough.


While dining at a beachside restaurant, near Los Angeles, my wife ordered an omelet. I’m not sure how many chickens were needed to create the massive plate of food that landed on the table, but it easily could have fed two or three people. The first reaction is to think about the great value, but really the reaction should be of revulsion. Sure some people package up the leftovers for another meal, but many others eat the entire meal, because they have been conditioned to finish everything on their plate. All of this extra food comes at a high cost, not only adding to the obesity epidemic, but also the cost of unnecessary food production and distribution. While value may seem like a good thing it comes at a tremendous cost. 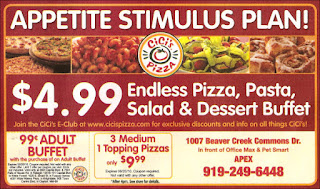 Think that movie theatres, convenience stores, and fast food restaurants are doing you a favour by offering so called value buckets of popcorn and soft drinks. Think again! Value to them means upselling, and making more money from products which have low unit costs. There is no benefit to you (and definitely no value) in eating more popcorn and drinking more pop than you normally would.
The cost of obesity, including increased incidence of heart disease and diabetes, and the added costs of accommodating the obese is staggering, yet little seems to be done to curb our insatiable appetite. Many restaurants in the U.S. now advertise the total calories for each meal, which is a good start, but when are we going to start tackling the real problem—our unhealthy relationship with food?
Maybe it’s not surprising that a man dining at the Heart Attack Grill, in Las Vegas had a heart attack while eating a Triple Bypass Burger—1.5 pounds of beef and a dozen slices of bacon. Meals at this restaurant average 10,000 calories. And patrons who weigh more than 350 pounds eat for free. Jack in the Box has a bacon milkshake that is nearly 1100 calories. There is a television program called Man vs. Food, where the host is celebrated for finding eateries offering the largest, most obscene amounts of foods. When did eating become a sport?
And don’t think it’s a problem exclusive to the U.S. While obesity rates aren’t as huge in Canada, as they are in the States, it’s still a growing concern on this side of the border. You might have noticed that five hundred ml bottles of sodas are quickly replacing the once standard 300 ml cans in many vending machines and food outlets. And while the soda company makes more money, we end up paying more—for the extra pop that we don’t really need, and for the impact it has on our bodies. And I was at a local restaurant recently, where everyone was walking out with boxes of leftovers. A sure sign that too much food is produced—and consumed. It’s something that we need not celebrate in the name of value.
Counting calories is not the way to curbing our obesity epidemic. Eating less (and exercising more) is the only thing that will help, and restaurants can do a big service by offering smaller portions. And we can stop being fixated on bigger is better, and embrace a healthier relationship with food.
Posted by Ken Donohue at 9:18 PM No comments:

It’s just after midnight, and I’m sitting in a VIP lounge at Vancouver International Airport. A China Airlines Airbus A340 is sitting at Gate D65, and in a few hours I’ll settle into seat 5K in the plane’s business class cabin for the 13 hour flight to Taipei.
It’s also my birthday, as the clock has now ticked over to April 6th. I have a glass of cold Coca Cola next to me, which to some is the equivalent of a nice glass of merlot or chardonnay. There was no cake, so I settled on a couple of cookies to mark the occasion. This will be the shortest birthday I’ll have. My flight leaves at 2:00, and once I cross the International Date Line, the day will turn over to the 7th of April.
My good pilot friend tells me that it should take about five-and-a-half hours to reach the Date Line from Vancouver. With that bit of knowledge, my birthday will last for less than eight hours. I suppose it’s better than those born on a February 29, who would only see their birthday every four years.
It was two years ago on my birthday that I was also sitting in an airport VIP lounge (come to think of it what a nice tradition I’ve started, and one that I’m sure my wife would like to be a part of). Then, I was in Tel Aviv waiting for a flight to Vancouver. And because I was flying west (and not crossing the International Date Line), my birthday lasted some 34 hours.
Most anyone would love for the opportunity to fly business class, and so for however long my birthday lasts this year, I’ll savour the experience.
Posted by Ken Donohue at 1:12 AM No comments: