﻿Christmas is all about traditions--midnight Mass, decorated trees, colourful lights, platters of stuffed turkeys, egg nog, stockings hung with care by the fireplace (does anyone know how Santa comes through the gas fireplace), and for those of an English persuasion, Christmas crackers.
Some Christmas traditions are more personal. Knowing my interest in airplanes, a friend, who I worked with, gave me an airplane tree ornament several years ago. The following Christmas another plane landed on my desk. In fact, as sure as Santa Claus, a new plane would arrive every year. Some were heavy and weighted down the branches. Others more delicate. But all were unique.
There were years when Lisa would traipse all over town searching in vain for a plane, and as the days ticked toward the 25th of December, she thought the tradition might end. But for more than 10 years, a plane was always found.
Since we no longer work with one another, I was sure this great tradition had been grounded, but yesterday, Lisa gave me another ornament. The Dornier 18, a 1930s flying boat, now hangs with 12 other planes on our Christmas tree.
Maybe you have a Christmas tradition of your own. 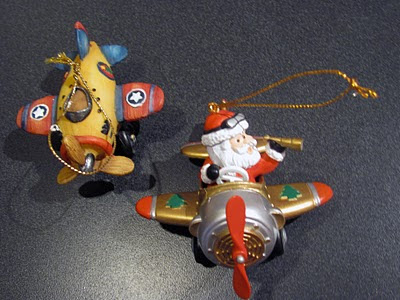 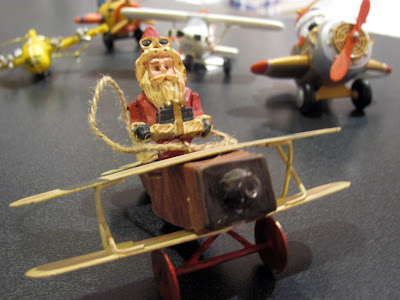 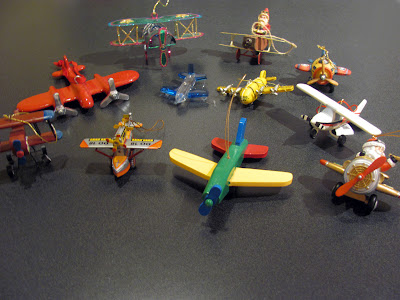 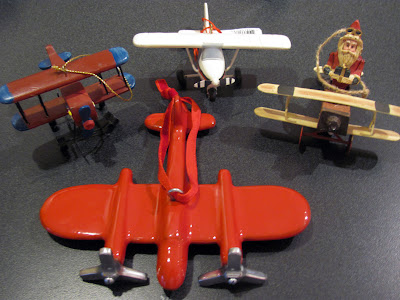 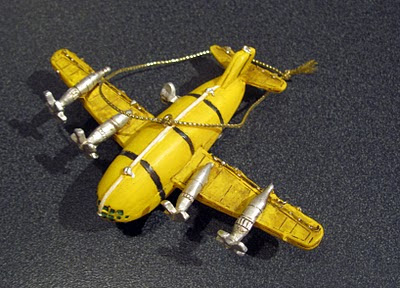 I once got asked in a job interview if I liked pets. And it wasn't for a job at a pet store. Despite getting the answer wrong (according to the person doing the interviewing), I still got the job. This leads me to an article in today's paper in which a poll suggested that pets are more trusted than people. I'm not sure what this says about human interaction, but at least I know that my wallet and cell phone, which I keep next to our fish tank, are safe.

I wasn't sure if at night our fish, the name of which I'm not sure, because my five-year old son has a new name for it every day, would rifle through my wallet and pinch a couple of 20s, or maybe use my phone to call friends on the Great Barrier Reef.

But this article allayed any fears I had, and I can trust that our fish will indeed stay in the tank. This couldn't be said of our last fish, which was flushed recently. When we opened the lid to feed her she would jump out of the water. In fact, on one occasion she jumped right out of the tank, landed on the counter, and bounced onto the floor. Utilizing the five-second rule, my wife brushed the fish off and plunked it back in the tank. Now that I think about it, maybe the fish was trying to go for my wallet.

It’s been some time now since I was involuntarily liberated from my job, and joined the 7% of other British Columbians who are out of work. One day I was leading a talented and successful team, and the next, a cost-cutting exercise eliminated my job. It can’t get more humbling than that.
On hearing that I had lost my job, my initial concern was for my wife and two young sons. I wondered how they would take the news that Daddy wouldn’t be going to the office everyday. When I told my five-year-old son, Jack, what had happened, he said matter-of-factly, “So, they don’t need you anymore?”
My other son, Max, is two years old, and is too young to really understand the concept of having, and not having a job, though he probably did wonder why Daddy has been around the house more. To be sure, if there is one positive from losing my job, it has been the extra time I have been able to spend with the boys. Whether baking muffins, doing art projects, or simply playing with them, the time I’ve been able to spend with them is precious.

I remember one day, not long after getting the news that they didn’t need me anymore, Jack and I were in the car driving, and out of nowhere he announced that I should get a job at Toys “R” Us. He assured me that he would come and visit me at work, where he would presumably check out all the toys. Then he suggested maybe I should work at our local supermarket. He thought some more and then offered that a job at the Aquarium would be a good idea, so long as I was able to get him a free pass.
In fact, Jack has been very supportive during my career search, and full of great ideas. Like not long ago, when he said maybe I could get a job at BLOCKBUSTER. Surely, he was figuring he’d get a discount on movie rentals. Though he did offer to help me restock the shelves.
Someone mentioned that maybe I just needed to be retrained. Like to what, I thought? Plumbing? Welding? Carpentry? I’m not handy with tools (I blame it on being left handed). I can’t cut straight and I don’t know the difference between a Robertson and a Phillips screwdriver. In fact, my Grade 8 woodworking teacher said he would pass me as long as I never took another course. He lived up to his side of the bargain, and so have I.  And I’m sure if I attempted some plumbing the water from the sink faucet would probably start flowing from the toilet.
While my son has been very helpful in identifying potential jobs for me, my wife, on the other hand, has been far more limiting in my career options. First, she told me I couldn’t become a police officer, soldier, or an airline pilot. Too dangerous, she said. Then she added astronaut, deep-sea fisherman, and miner to the list. Okay, how about being a logger? No! Roofer? No! Steelworker? No! Professional hockey player? She just laughed.
When Premier Campbell announced his retirement, I thought, how fortuitous. But before I could even consider that job opening, my wife said politics was out of the question. It wasn’t so much the physical danger of that position, but rather the verbal barbs one must endure.
Who knows what she’ll come up with today? Maybe, my son will have some better ideas for me.
Posted by Ken Donohue at 4:56 PM 1 comment: 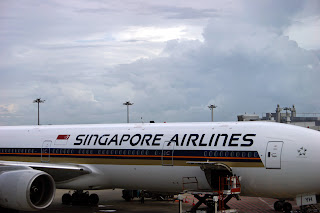 If you’re not intimately familiar with the airline industry, chances are you have never heard of the industry convention, Fifth Freedom. Sort of sounds like a resistance movement, but in reality it allows an airline from one country to carry revenue traffic and cargo between two or more other countries. The benefit for the airline is that it allows it to break up a long flight, while at the same time generate revenue between two foreign countries. Passengers benefit by getting more choice, and are able to experience an airline that they may not normally have an opportunity to. And while fares for these flights are often competively priced, in most cases they also come with full international service.
It was at the 1944 International Air Transport Conference, where the Canadian delegation’s proposal to allow five “freedoms of the air” was adopted. There are now nine freedoms, which simply are negotiated commercial aviation rights granting a country’s airline the privilege to enter or land in another country’s airspace.
The First Freedom allows an airline from one country to overfly another country without landing. This happens everyday, for example when airlines from Asia and Europe fly through Canadian airspace before landing in the United States. The Second Freedom allows an airline to land in another country for technical reasons, often to refuel, without picking up or letting off revenue traffic. The Third and Fourth freedoms are the most common, which allows an airline to carry passengers and cargo from one's own country to another, and back again.
It’s the Fifth Freedom flights that offer an interesting perspective. I once had a friend seeking advice from me, because he wanted to fly from Hong Kong to Bangkok, and he wasn't sure what airline flew this route. Given the origin and destination, Thai Airways and Cathay Pacific were obvious choices, with both offering multiple flights a day. However, I told him he could also fly on SriLankan Airlines, Emirates, Kenya Airways, Royal Jordanian, or Ethiopian Airlines—the latter of which is, maybe surprising to some, actually a well-regarded airline. Who knew there was such choice between these two cities?
Interested in flying from Los Angeles to London? Did you know that Air New Zealand can get you there with some Kiwi flair? How about flying from Los Angeles to Paris on Air Tahiti Nui? Or New York to Frankfurt on Singapore Airlines or Air India? Fancy some Chilean hospitality on a short sector between Toronto and New York. Did you know that instead of flying from Vancouver to Las Vegas on a small jet  with limited service, you could fly four times a week on a spacious Philippine Airlines Airbus 340-300, with 264 seats in a two-class configuration? 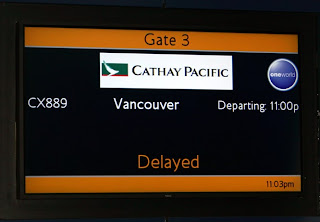 While fifth freedom flights often offer good value, there are some drawbacks. Some don't fly daily, and the timing of the flight is not always ideal. Like the time I flew Hong Kong’s, Cathay Pacific, from New York to Vancouver, and it arrived at 2:00 am.
Vancouver’s geographical location made it well suited for fifth freedom flights, but in recent years many of these have been discontinued for a variety of reasons. Airlines that offered these flights from Vancouver included:
Philippine Airlines – New York (Newark)
Qantas – San Francisco
Singapore Airlines – Seoul
Air Pacific – Honolulu
Malaysia Airlines – Taipei
Japan Airlines – Mexico City
In places all over the world, these Fifth Freedom flights exist, so the next time you book your flight, ask your travel agent or search the web, and you just might be able to fly an airline you’ve never heard of.
Posted by Ken Donohue at 11:11 PM No comments: