The Path of Ancients

It was just before five in the morning and I was navigating a scooter through the dark, bumpy roads of Bagan. I swerved around a cow that sauntered in front of me. I was travelling toward Old Bagan to watch the sun rise. I had only a vague sense of where I was going. The world looks different in the black of morning, as the light on my scooter struggled to light a path in front of me.
A motorcycle pulled up next to me, and a young guy asked, “Are you going to watch the sunrise? I know the best spot…follow me.”

I didn’t say anything to him but followed along. I knew that the cost of his help would be listening to his sales pitch for his paintings, like a time-share hawker in Hawaii. I have quickly learned that everyone is a painter in Bagan.

We turned off at a temple just next to the main road. He lead me up a narrow passageway of stone steps with the light from his mobile phone. As I climbed up through the tight space I felt like Indiana Jones, except I was wearing a ball cap instead of a fedora. And I didn't have a whip.
We popped out onto a small terrace and then climbed higher pulling ourselves up the outside of the temple, placing our feet carefully on ledges that were only half-a-brick wide. There were about six others already staking out a perch. 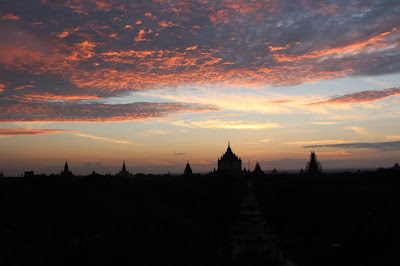 The sky began to lighten, as the sun prepared its grand entrance. Then slowly, like a shy child, the big ball of fire slowly rose above the horizon, colouring the vast plain that is Bagan. It is here, a thousand years ago, where more than 10,000 temples and pagodas were constructed. Impressively, there are still more than 2,000 left standing.


With the sun now warming the air, I climbed back down, and after listening to a pitch for some art, I hopped back on my scooter, and rode to nowhere. Curious, I turned down a dirt track, which a short way along had narrowed and was muddy. I turned the throttle to give the bike more power, so I wouldn’t get stuck, and put my feet close to the ground, so I wouldn’t fall over. Mud splashed up on my sandal clad feet.

Carrying on, I realized no one was around and I didn’t have a map with me. What’s an adventure if you know where you’re going. A short distance away was a large temple. I climbed off my bike and started across a grassy field. Then I stopped and wondered if there were any harmful critters lurking in the grass.

I thought of snakes. The first one to come to mind was a Burmese python. It took me a second to compute. Myanmar used to be called Burma, and so yes perhaps a Burmese python might be slithering nearby waiting to swallow or strangle me. I looked in the tree next to me and in the grass ahead of me. I didn’t see anything, but I listened to my overactive imagination and retreated. I drove my scooter through the bumpy field, thinking that if I had to I could outgun a python chasing me. 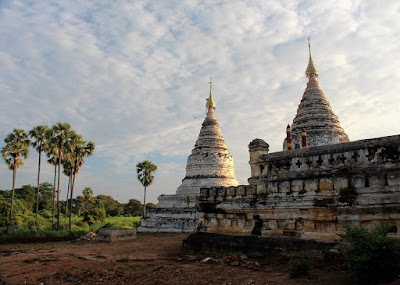 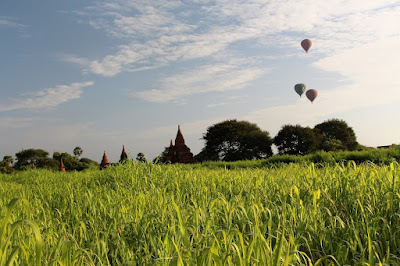 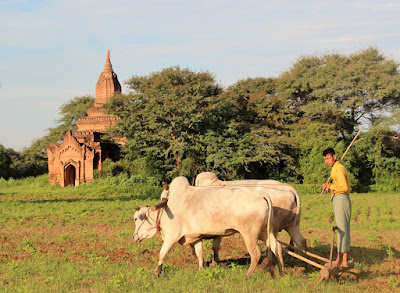