After landing at Iceland’s Keflavik Airport, I hopped in a bright green rental car and hit the road. Before getting too far I wanted to stop at a grocery store. From the road, I spied a store called Husasmidjan, which looked like a grocery store. I got out of my car and went in, only to realize it was a home improvement store. Why didn’t I study Icelandic when I was in school. I looked at the sign again and it now made sense. Hus, is Icelandic for House. Not far away I did find a supermarket.


My destination that first evening was Vik, a small village about 200 km southeast of the airport. But what should have been a two hour drive turned into four hours, as I kept stopping along the way to marvel at the scenery. Iceland is like that beautiful woman you see that doesn’t wear makeup. Brimming with confidence, the country invites you to enjoy its natural beauty.
Iceland is known for its waterfalls and it took just an hour to spot my first one. Located beside the main road that circles the island, Seljalandfoss (foss means falls in Icelandic) looked majestic from a distance. It was even more impressive close up. The water pours over an overhang, so it’s possible to walk behind the falls. A unique view to be sure (good to have your rain jacket handy).


﻿
﻿
Driving on, I saw more waterfalls. How magical this land, I thought. The large Skogarfoss begged me to get out of my car. I wasn’t disappointed, especially after climbing the hundreds of stairs (I started counting but lost track) to the top of falls, where you can watch the river being forced over the edge. The view from the bottom is equally breathtaking.

﻿
﻿During my travels throughout the country, I noticed that some people had even built their homes next to waterfalls. Who needs to buy a water feature when you’ve got a natural one in your back yard.


It was almost 9:00 PM when I got to Vik, the southernmost village in Iceland. A lone white church, its roof covered in red, sits on a bluff overlooking the village. It’s the one on the cover of my guidebook, so I tried to recreate the image (minus the wildflowers that hadn’t yet bloomed) with my camera. 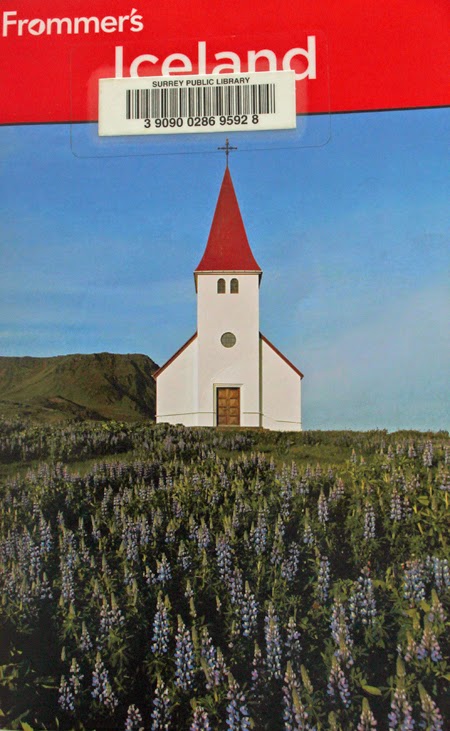 The next morning, I continued driving along the Ring Road to Jokullsarlon, an iceberg lagoon, about 200 kilometres away. I hadn’t gone more than five minutes down the road when I turned off and drove a short distance along a farm path before getting out to admire another waterfall. This was much smaller than others I had seen, yet still significant enough to deserve a look. I climbed a wooden step ladder that had been placed over the barbed wire fence, and stood for a moment at the base of the falls revelling in the fact that I was the only one around. It was quiet except for the sound of the water falling into a small pool before being carried away to the ocean.


With a population of just 350,000, and almost two-thirds living in the capital, Reykjavik, there are times you’ll feel like you have the whole country to yourself. There were often long stretches of road where it was just me. I’d stop the car in the middle of the road, get out to take a photo and drive on. 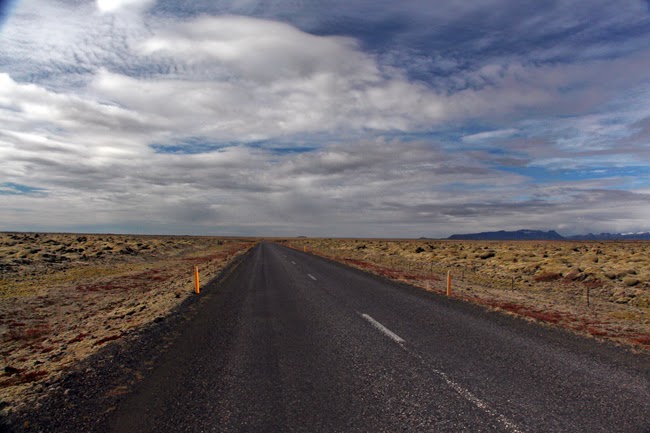 With Icelandic pop songs filling the car, I drove on, mesmerized by the vast lava fields covered with green moss. I half expected to find a group of trolls living amongst the rocks. On further inspection, I didn’t see any trolls, but the pillowy-soft moss was surprisingly several inches thick.

﻿
Several hours after leaving Vik, I pulled into the parking lot at Jokullsarlon. The glacier has receded seven kilometres over the past hundred years, leaving behind a lagoon filled with icebergs. When ice breaks away from the glaciers, it will either stay in the lagoon and melt or float out to the ocean. A herd of seals inhabits the lagoon and can often be seen swimming in the water or basking atop one of the icebergs.
I joined a handful of others for a boat ride through the lagoon. The power of nature was on display here as we looked at ice that was formed a thousand years ago, some of which contains volcanic rock and dirt. 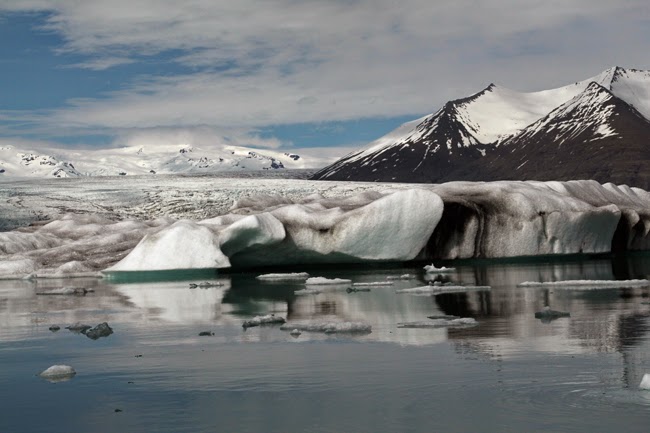 Back in my car for the drive back to Vik, and with only a quarter tank of gas, I began worrying that I might run out of gas. Why should I have been surprised? I had already driven 400 km. On the way, I had only seen one gas station between here and Vik and a pump next to an abandoned building, which I figured wouldn’t be operational. I started doing the math in my head to see if I could make it back to Vik (200 km) with a quarter tank. Not likely, I surmised.


I drove a little slower hoping to nurse the fuel I had left. About 20 minutes down the road, I spotted the abandoned building with a gas pump out front. To my surprise (and relief) it worked. What a fantastic system. Who needs a gas station with an attendant when all you need is a pump in the middle of nowhere.
With a full tank of gas, I continued on to Vik, marvelling at the ever changing scenery. Above me I saw the contrails of passing plane, presumably on its way to North America from Europe. They don’t know what they’re missing, I couldn’t help but think.
Inspired by Iceland. That’s the latest marketing slogan to promote tourism. These are more than just empty words slapped on a brochure or website. It’s not hard to feel inspired by everything this country has to offer.
View more of my Iceland photos
Posted by Ken Donohue at 7:30 AM

I love this post. I want to go back.

Thank you so much for sharing. I'm so tempted to go now :))