East India is not a country!

Let’s set the record straight…East India is not a country. I mention this seemingly obvious statement, because the way some people talk one would be led to think that there is indeed such a country.

What I’m getting at is our penchant for referring to people from India as East Indians. Every once in a while (last week, in fact) when my wife refers to an East Indian, I humor her and ask if she’s referring to someone living in Calcutta or Chennai, perhaps? She usually shoots back with a, “you know what I mean.” And she’s right I do know what she means, but just because Christopher Columbus was an idiot and didn’t know where he was, isn’t an excuse to continue this absurdity.

I had a discussion with a colleague recently about this very issue, and she appreciated my argument, but she said it’s easier to use East Indian to prevent confusion. Confusion from what? The only people that refer to Aboriginals or First Nations as Indians are Vancouver Sun headline writers (you’ll never see the word Indian used in the body of an article) and the Federal Government, which still has an Indian Act and a Department of Indian Affairs.

What’s ironic is that most of the Indians in Canada actually emigrated from the Punjab, which is in western India, so if anything, shouldn’t people be referring to them as West Indians? If only Columbus would have left home with a good map, or the latest Lonely Planet guidebook. 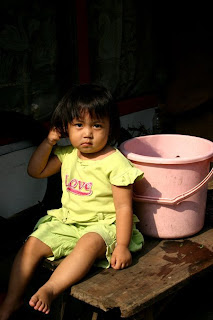 After my Around the World in 9 Days blog, I was asked why I don't I start a regular blog. But what would I write about? Call me a reluctant blogger. Then I gave pause and reminded myself that it's rare for me not to have an opinion about something, plus I have a mind full of stories to share from the 34 countries* I have visited.

So, why White Man Walking? Whenever I visit a city I love to hit the street walking. The pulse of a city and the stories of its people can be felt on the streets. I can feel and smell (sometimes not in a pleasant way) the heart and soul of a place. Walking gives one an experience that can't be had by sitting behind the tinted windows of an air conditioned taxi or bus.

It was in the Indonesian capital of Jakarta, where I gave myself the white man walking moniker. I was the only white guy in Jakarta. Well, that's not entirely true, I did see one or two others on the souvenir floor of a big department store, but that doesn't really count.

Jakarta wasn't planned for walking. In fact, there doesn't seem to be a lot of planning when it comes to this city. On the flight, I got talking to a guy that owns a tour company in Jakarta. I asked if it was possible to walk from my hotel to the older part of the city. He laughed and said he wouldn't--it's hot, dusty, and polluted.

On my first morning, I walked out of the hotel lobby, and the concierge asked if I would like a taxi. "No thanks," I replied, "just going for a walk." "You're walking," he asked in a way that suggested I was the first guest who had considered such a thing? The streets around the hotel were surrounded by hole-in-the-wall auto parts stores and car repair shops. At night these industrial shops moonlight as food stands.

Leaving the hotel staff stunned that a white man was walking in Jakarta, I set off in a northerly direction, and soon came to a busy intersection. Cars, buses, trucks, and motorcycles buzzed past, leaving a trail of smoke in their wake. I soon figured that the only way to make it across this busy street was to do what the locals do. Find a hole in the traffic (not easy) and once you commit, keep walking, in the hope that you make it across in once piece. Carrie has said more than once, that I will probably meet my demise in a far away place trying to cross a hot and dusty street while a huge bus or truck turns me into a grill ornament. I made it unscathed this time, and only once did I stop in the middle of the road unsure of the intentions of a guy on a motor bike. We locked eyes, like a deer caught in the headlights of a truck. He was probably wondering why a white man was walking. After hesitating for a split second, I continued across the street, and he zoomed by. 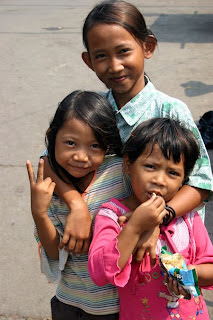 Wanting to get away from the traffic mayhem, I ambled down a narrow street, that led to little alleyways, which if looked down from above may have looked like a labyrinth. It was here that I came across such warm people. They had beautiful smiles and a kind spirit. Living next to stinking heaps of garbage, and fetid canals filled with crap, these people had little more than their name and a good heart.

After walking for several kilometres in the searing heat, and with a series of blisters starting to form on both feet, I returned to my hotel. The hotel staff acted surprised, because guests usually arrive back to the hotel in a taxi. "Did you have a nice walk," one of them asked?

I went out later in the afternoon for another walkabout. This time the hotel workers didn't mention a taxi, as I wandered into the noisy street?

Maybe I'll see you walking out in the world one day!

* Of the 34 countries I have visited, I include Hong Kong and Macau, which technically aren't countries, but I visited both while still territories of Britain and Portugal respectively.
Posted by Ken Donohue at 9:08 PM 3 comments: