Transparency International, which calls itself the global civil society organization, released its annual corruption index. New Zealand (the only place my wife has been that I haven't) apparently is the least corrupt country in the world. Which is nice and all, but really how corrupt can a place be when the sheep population outnumbers humans 10:1. Yes, just over 4 million people call this island nation home, while more than 40 million sheep really run the place. As much as low corruption leads to good government, it sounds...well, rather boring.

In case you're interested, the five least corrupt nations are:

Canada was tied for 8th, sharing that place with Australia and Iceland. But it's the countries at the bottom of the list that sound like exciting places to visit.

The most corrupt nation is Somalia, which isn't surprising of course to those on one of the 65 ships that have been attacked or hijacked by Somali pirates. There hasn't been a functioning government for many years. The 5 most corrupt countries are:

The most corrupt country that I have visited is Iran, which placed 168th. Again, not surprising considering this year's disputed Presidential election. We didn't experience any overt corruption during our visit, although we were detained by the police for a short while, and had to secretly remove the film from our camera and hide it in our host's sock, so that it wouldn't be found and confiscated by the police at the airport. 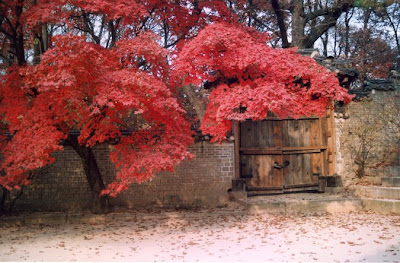 Honestly, and really isn't that what this is all about, the only corruption that we have knowingly engaged in was in South Korea. As foreigners working in Korea, we needed to obtain an Alien Registration Card. One day, the mysterious Mr. Park, whose job we never really knew and who just appeared from time to time, escorted Carrie and I, along with two other teachers, to the Department of Immigration. Housed in a non-descript , concrete building, we found a seat along a back wall. After a long wait we went individually to a counter to get fingerprinted and had our picture taken, so we could be registered as Aliens.

There was more waiting, and then Mr. Park led one of the other teachers to a counter, where we could see her signing some papers. She seemed stunned when she returned and told us that they asked her to sign someone else's name on some immigration documents. Mr. Park then led Carrie to the counter, where she was asked to do the same thing. We have no idea what the documents were for, or why they were asked to sign them. Sometimes it's just easier not to ask.
Posted by Ken Donohue at 8:37 PM 2 comments:

Everything in America is Big

Have you noticed that everything in the U.S. is BIG--The Big Easy, Big Sur, Battle of the Big Horn, Super Big Gulps, Big Bear Lake, Big trees that they call giants, Big Brother. It's a big country (though not the biggest), with big portions and big people, big deficit, big cars that drive on equally big freeways. Even former president Bill Clinton talked big, when he said: big things are expected of us , and nothing big ever came of being small.

It's a larger than life place, so it wasn't surprising when I heard about the very big 4,060 year sentence given to a child sex offender and recently upheld by a Texas Appeals Court (apparently Texas is a BIG state, though not the biggest). I was thinking maybe a 3,000 year sentence was reasonable, but a Texas jury was looking for something bigger. James Pope will not be eligible for parole until the year 3209. Now that's a lot of years spent in the Big House.
Posted by Ken Donohue at 8:46 PM 2 comments:

If you read Saturday's Sun from cover to cover you might have caught these two references:

South African Airways offers low airfares and good service between Seattle and a choice of destination cities in South Africa. The flight from Seattle connects through New York which makes for a nice break for such a long journey.

And if you did catch these excerpts, from different stories, you could be forgiven for thinking that South African Airways flies to Seattle and that Thai Airways serves Vancouver. Neither is the case. Just some sloppy journalism. 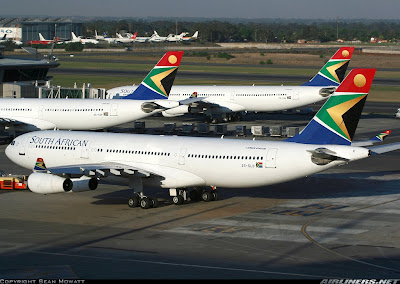 South African Airways, which by the way has one of the finest liveries (that's the fancy paint on the outside of the plane) in the world, doesn't fly anywhere near Seattle. In fact, their only two North American destinations are Washington DC and New York. Instead of fine South African service between Seattle and New York, you'll get no service on an American airline, and if you choose to book through the airline's website as the article suggests you'll be forced into making an inconvenient and expensive connection between New York airports (I've done it before it's a hassle, and the cab ride will be over $100). Oh, and the fare will set you back more than $2000. But in case you're interested, I checked on Travelocity, and found a fare for the unbelievable price of $1400, all in, and no need to transfer airports. Consider it my gift to you. Just send me a postcard. 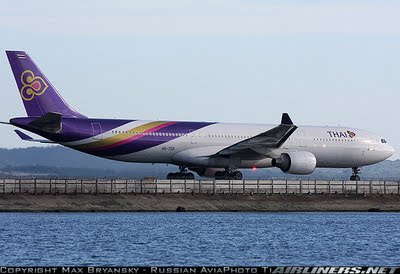 Now on to the second misleading article. Presumably long time fugitive, Rakesh Saxena, who was extradited last week to Thailand after 13 years of playing the Canadian judicial system did indeed arrive on Thai Airways flight 615, but that flight originates in Beijing. Thai Airways has never served Vancouver. It is likely Saxena and his entourage of Thai police officers flew from Vancouver to Beijing on Air China.
So when you're at your next cocktail party and someone says they heard that Thai Airways flies into Vancouver, you'll know they don't. Don't believe everything you read in the paper.
By the way, if you were interested in purchasing a ticket on that South African Airways flight to Jo'burg, my legal name in my passport is KENNETH.
Posted by Ken Donohue at 7:37 PM 1 comment: