The assumptions we make about men and flowers

The other day, I was standing on a train platform with a large bouquet of flowers. A woman came up to me, sized up the garden of flowers, and with a smile said, “She will like them!” I didn’t tell her that they weren’t for “she”, but rather they were for me.

Once on the crowded train, I noticed one of my neighbours, and since she had a seat, she offered to hold the flowers. I was thankful for this, because I wasn't sure how I was going to hold my bag, and the flowers, while at the same time trying to hang on.

“Your wife will like them,” my neighbour said, eyeing up the flowers.

“The flowers are actually for me,” I replied.

She was right. My wife did like them and, so did I.

I thought it interesting the assumptions people make about a man and flowers. It reminded me of the time I picked up some flowers for my wife one time for no particular reason other than it was a Tuesday. When I went to pay for the flowers, the clerk looked at me and said with sincerity, “What did you do wrong?”

Funny, how that question is always asked of a man. Could you imagine a woman being asked that same question if she were buying a six-pack of beer.

A number of years ago I was at a dinner party with a handful of couples. One of my friends was lamenting that her husband didn't give her flowers anymore. The other women at the table then glanced at their husbands, with one of those—the question is also for—looks.

While the husband under fire tried to explain himself, I asked his wife when was the last time she got him flowers.

“Yah,” said her husband, who now felt the pressure lift.

“But, he wouldn’t like flowers,” she said, with confidence.

I polled the men at the table and asked if they would like it if their wives gave them flowers. I remember all but one saying they would.

Fresh flowers can brighten any space, and while many men may much prefer a case of beer over a bouquet of flowers, they can be enjoyed as much by men as they can by women.

So, the next time you see a man carrying flowers, they may not be for “she”, they may in fact be for him.
Posted by Ken Donohue at 12:34 PM No comments:

Why Smart People Do Stupid Things 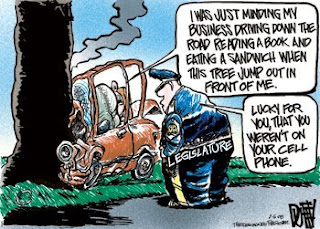 Why Smart People do Stupid Things. That was the provocative headline in Maclean’s magazine. I was intrigued. It reminded me of the story someone once shared about being on a road trip with a very intelligent person, who wasn’t very capable with a map. “Sometimes the smart guy isn’t so smart,” the storyteller said with a satisfied grin. A sign, I suppose, that even the highly intelligent are mere mortals when it comes to navigating with a map.

The premise of the article was that we should be doing more than simply measuring one’s intelligence, rather we should also be measuring a person’s rationality quotient—their ability to think rationally.

I was particularly drawn by the reference to scientists Peter Richerson and Robert Boyd, who suggest that Eons of evolution have selected for all animals, including humans, “to be as stupid as they can get away with it.” The article goes on to suggest that thinking is costly—in concentration, energy, time, and risk. Well, that explains society, then.

While we can blame evolution for our stupidity, apparently rational thinking, unlike intelligence, can be taught, and mechanisms put in place to encourage it.

Every day I see seemingly smart people doing stupid things. And a lot of them take transit. Here are some poignant examples.

Go to any metro station, and as a train enters the station, you’ll see people running for the train. It’s what I’ve come to call, Last Train of the Day Syndrome. Sufferers of this malady are incapable of reasoning that in less than a minute another train will arrive. In their haste they bump into people and knock down little old ladies. People with advanced stages of this disease can often be seen struggling as they try to squeeze through the closing doors of the train.

And speaking of train platforms, have you ever noticed the people who stand in front of the open door, impeding those trying to get off the train. If these people took a moment to think, they would realize that they would get on the train quicker, if they moved aside until those getting off had cleared the way. So simple really.

Then there are those who board a bus and then refuse to move to the back. They slow the boarding process, obstruct others trying to get past them, and even leave others left standing at the bus stop, because the driver thinks the bus is full, even though the back is empty. They have even started helping out the stupid people by playing a recorded message on some buses that tell people, if it wasn’t already obvious, to move to the back of the bus. Some people still ignore the message.

And what’s with line creep. That’s the strange phenomenon where a queue will form, say at a bus stop, and slowly people creep forward even though the bus hasn’t arrived, and there is no place for them to go. Before you know it a huge gulf, large enough to sail an aircraft carrier through, has opened between you and the person in front of you.

Have you ever noticed those people waiting in the departure lounge of an airport, who crowd around the boarding gate, even though their seat row hasn’t been called? What’s even more perplexing is when the gate agents make numerous announcements asking this huddled mass of stupidity to move away, so they don’t impede the boarding process, they still stand in the way. Are they afraid the plane will leave without them?

While there are stupid people on buses, and trains, and planes, there are also lots of drivers being stupid. Why do people block intersections with their car when traffic is stopped in front of them?

And don’t get me started on the epidemic of red light running. The other day I witnessed four vehicles going through an amber light. The second vehicle was in the middle of the intersection when the light was red, and the third and fourth cars left on a red. Not only is this stupid, it’s dangerous, and inconsiderate to the drivers traveling the other direction.

Imagine for a moment if we were a little less stupid. Sure it would take more time and energy, but the world would probably be better off and so we would we. In fact, I think we’d find life a little more pleasant.
Posted by Ken Donohue at 8:47 PM 1 comment:

You know you're in America when...

I recently spent 9 days in Southern California. Pity me, I know. Canadians and Americans are similar in many ways, but there are some very real differences. I found three easy ways to tell that I was in America. And flag waving wasn't one of them. No, because the biggest flag wavers are actually inane and insecure Canadians who plaster Canadian flags on their backpacks and bags when the travel. I digress.
Three ways to tell that you are in America:

1. Everyone wears sneakers, or running shoes
Doesn't matter the occasion, Americans will wear sneakers. I'm sure if you attended a black tie event, all the Americans would show up wearing running shoes with their tux, or evening gown.
2. You hear the word, "huh"
Instead of the ubiquitous, Eh, which Canadians are apt to use, Americans (and my mother) use, Huh, instead. If you thank a Canadian for something, you'll hear, "you're welcome," but if you thank an American, you'll get this response, "uh huh!"
3. You'll see ridiculous signs like these
The first sign was posted at the hotel's swimming pool, and the second at the hotel's restaurant.
"Hey honey, I think I'll go for a swim after breakfast!"

Good job I already have two kids. I guess I'll have to find myself a good Oncologist, now. 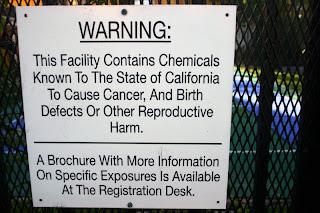 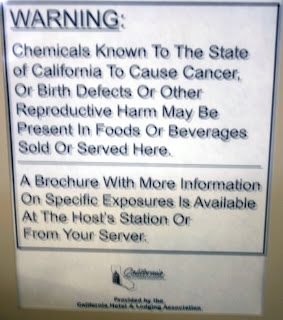 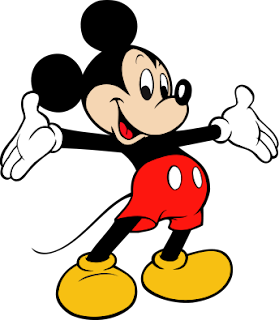 We have spent the last seven days enjoying the sun and sand at San Diego's Mission Beach. When we started packing our bags last night, our son, Jack, asked if we were going home. My wife told him one of those lies that parents are allowed to tell. She told him that we going to a differrent part of San Diego to stay in a hotel for two days. He must think that San Diego is one big city, because he kept asking, "are we there yet...are we there yet?"
It's not easy going to Disneyland without your son actually knowing you are going to Disneyland. Our family, who are travelling with us--Grandparents, Aunt, Uncle, and Cousin have all sworn that they would not reveal the surprise prematurely. I think it was most difficult for the 9-year old Cousin to keep the secret, but he did a fine job.
Fortunately, Jack was asleep in the car when we drove past Disneyland on the way to the hotel. Then in the hotel he asked why there was a framed painting of Mickey and Minnie Mouse on the wall. I had to hide the monthly Disneyland calendar that the hotel places prominently for the convenience of guests. When we were swimming at the pool, I was afraid someone would ask if he went to Disneyland. They didn't. But I did have to distract him when we were walking back to our hotel room, and a little girl in front of us was carrying a Disneyland bag and wearing a t-shirt from said amusement park.
Later in the evening Jack and I were sitting by the pool staring at the stars and moon above. Through the trees, I could see the fireworks at Disneyland lighting up the night sky. I thought for sure he was going to ask about the fireworks, but he mustn't have seen them. A plane passed above, and I asked him where he thought it was going. "Maybe Disneyland," he said. To most, that may seem strange, but Jack often talks about Disneyland when playing make believe, and he likes to read the Disneyland park map before going to bed.
In his short life, Jack has already been to Disneyland twice. For whatever it's worth, it was unfortunate circumstance that led to his second visit.
Jack is now sound asleep, and the secret is still safe.
Posted by Ken Donohue at 9:14 PM 1 comment: