So I've said it before, and I'll say it again...it's time for the Canadian Government to stop minting the one cent coin.

It's a terrible waste for something that has virtually no value. People throw the darn things away or squirrel them away in jars and out of circulation, forcing the government to produce more cents. It doesn't make any sense. Why do we continue to allow this to happen? I was heartened by a nationwide poll a few months back that suggested almost 60% of Canadians would be in favour of scrapping the Penny. I have no idea what the other 40% are thinking, but the majority of Canadians are thinking with their heads.

I haven't heard a good argument for keeping the one cent coin. In fact, the only thing I ever hear is that merchants will round the price up if the Penny is discontinued. Really? Is that it? We're going to continue to waste money and resources, because someone is afraid they might have to pay a couple more cents for their cup of coffee, which they are already paying $3 or $4 for anyway. Big deal, I say. Even if the price did get rounded, the sky isn't going to fall, as other more progressive and forward thinking countries have already done away with their low denomination coins.

When I saw this poll in the news, I thought I would ask the Federal Government what their position was on this issue (I asked the candidates in my riding during the last election, and none bothered to respond, even the Green Party candidate whose biggest accomplishments were that he grew up in the riding, learned to ride his bike in the riding, and went on his first date in the riding, I digress).

I sent the following email to the Department of Finance on August 17th:

For some time I have wondered why Canada continues to produce the one cent coin. Today, they are of little value, which is witnessed as people more often throw them away, or toss them in jars, putting them out of circulation. Public opinion polls suggest that the majority of Canadians want to get rid of the one cent coin, yet the government seemingly doesn't have an interest in stopping production of the coin.

I would be interested in knowing why the government continues to produce the one cent coin, and if there is a plan to stop production in the near future?

I look forward to hearing from someone.


The other day, more than two months after sending my message, I received the most patronizing, meaningless, absurd response from James Flaherty, the Minister of Finance (okay, I know he knew nothing of my message, but he signed the inane letter). He didn't even answer my questions. 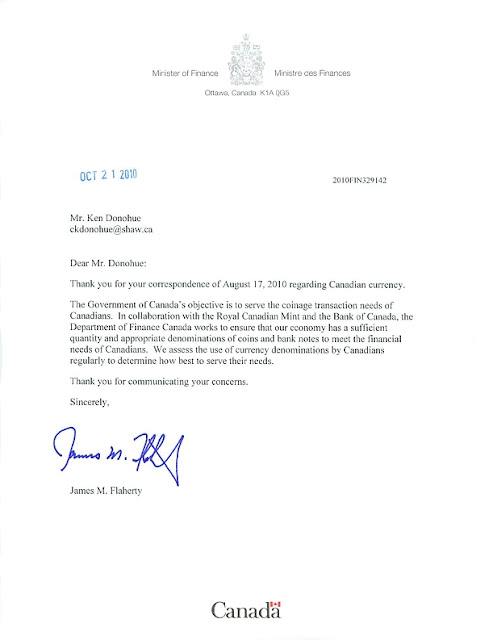 Here is the text of the letter:
Dear Mr. Donohue:
Thank you for your correspondence of August 17, 2010 regarding Canadian currency.
The Government of Canada's objective is to serve the coinage transaction needs of Canadians. In collaboration with the Royal Canadian Mint and the Bank of Canada, the Department of Finance Canada works to ensure that our economy has a sufficient quantity and appropriate denominations of coins and bank notes to meet the financial needs of Canadians. We assess the use of currency denominations by Canadians regularly to determine how best to serve their needs.
Thank you for communicating your concerns.
Sincerely,
James M. Flaherty
How much did they pay someone to write that drivel? I don't know what's worse, the fact it took two months to get a response or the nonsensical letter itself.
My two questions are still outstanding -- why does the Government continue to produce the one cent coin, and is there is a plan to stop production in the near future?
I wonder if the lackey that wrote this letter has any idea that the Canadian Senate's National Finance Committee has been holding hearings on this issue, since last Spring. (yes, apparently they actually do something). I'm not sure why that's necessary, but if they must.
And a week or two before I received the missive from Mr. Flaherty's office, the head of New Zealand’s Reserve Bank currency department told the hearing about his country's move to get rid of their one and two cent coins in 1989 (yes, that's more than two decades ago)
“The one- and two-cent coins had lost their value and no longer had any effective purchasing power, and as in Canada, the coins had become more costly to produce than they were worth. So it was a relatively straight-forward exercise”
No kidding! Of course it's straight-forward. It was reported that the Committee is expected to report its findings to Mr. Flaherty in the coming months. So, why wasn't that information included in the response from the Minister's office?
It may seem like a small issue (though it can't be if a Senate committee is spending months studying this), but to me it's a small win. It just makes sense. The majority of Canadians see it that way, as have other countries.
Posted by Ken Donohue at 9:56 PM 2 comments:

I had only been in Santa Cruz, Bolivia for less than 12 hours when someone asked what I thought of the city. I hate these questions, because invariably I’m forced to lie. I find that either the place is a real dump (though I can usually see some beauty amidst even the crappiest of places), or I haven’t had enough time to get a feel for the place. In the case of Santa Cruz it was the latter.

“It’s good,” I offered, not telling him that five of those 12 hours was spent sleeping off two days of fatigue. Really, at that point my impression of the city was gleaned from looking out the windows of a taxi from the airport to my hotel and another taxi to the offices of AeroSur.

I’ve long thought that Bolivia was one of the more random countries in South America. Not quite as obscure as those three countries on the top right of the continent that no one remembers. See, you’re scratching your head trying to figure them out. Let me save you some time looking it up – Suriname, Guyana, and French Guiana.

Bolivia is one of only two landlocked countries in South America—the other being the equally random country of Paraguay. Bolivia actually lost its coastline to Chile in the War of the Pacific, which lasted for five years, ending in 1884.

It is one of the poorest and least developed countries in South America, and is geographically diverse—from the Andes to the Altiplano, or high plains, to the eastern lowlands, much of it Amazonian rainforest. At more than 13,000 feet, it boasts the world’s highest capital [La Paz], and is home to the world’s largest salt flat, and shares with neighbouring Peru, Lake Titicaca, the world’s highest navigable lake.


If indeed you have an image of Bolivia, then it probably includes an indigenous woman wearing a bowler hat with a colourful blanket draped over her shoulders. But as diverse as the high Andean peaks are to the sweltering jungles of the east, so too are Bolivia’s cities. In many respects, Santa Cruz de la Sierra [it’s official name], the country’s largest city is world’s away from the capital, La Paz. Santa Cruz is relatively new. Just a few decades ago, the city’s population was just over 100,000. Now it is more than 1.5 million and the source of much internal migration, as the poor from other parts of Bolivia move here for a better life. Santa Cruz is the business centre of the country and is more prosperous—evidenced by the number of luxury car dealerships and international brand stores.

Some, like one person I was talking to, feel that the city has grown too quickly, and that the infrastructure hasn’t always kept pace. It’s a city that seems a little worn around the edges, and yet turn a corner and you’ll see a modern and hip side. Stylish fashion, coffee shops that spill out onto the sidewalks, and business people with big ideas.


While the temperature in Santa Cruz is usually in the 30s, for the past two days, cool winds from southern Argentina, called surazos, common during the winter months have blown in and lowered the temperature by more than 10 degrees.
Many of the city’s streets have been covered with hexagon-shaped paving stones, which when put together have the look of large honeycombs. While driving over the stones, which invariably are uneven, makes for a bumpy ride, one is amazed when you think that each stone was laid by hand. Apparently, this labour-intensive work was initiated to create jobs. I can see how it would accomplish that.

To the outsider, the streets seem calmly chaotic. Is there such a thing as orderly chaos? Traffic doesn’t move all that fast, but apart from the ring roads, there are few lights or stop signs, yet it all seems to work. At the city’s large roundabouts it is as if the cars are an army ants, veering from side to side finding an opening, as they fight their way back to the colony.

Crossing the street can take some patience, as the few cross walks that exist are apparently considered street art, because cars don’t stop for pedestrians. A few times I caught myself standing on the corner for some time waiting for a break in the traffic that never came. It was then that I took the cue of a local and followed them across the street finding holes in the string of cars.

I made my way to Plaza 24 de Septiembre, the centre of Santa Cruz. The square is ringed by the historic town hall, Basillica de San Lorenzo, some tourist shops and an Irish pub. I made like the locals and found an empty bench.

Several shoe shiners had chairs set up in the square. When not shining shoes, they were selling small bags of corn for people to feed the pigeons. Looking at my grubby shoes, I decided they needed a shine, so I climbed up on the green chair, and was handed a newspaper. Since it was in Spanish I put it aside and watched the guy ply his trade. A shoe shine costs 3 Bolivianos, or 45 cents. I gave him 10 Bolivianos and walked back to my hotel, dodging the traffic and trying not to scuff my shiny shoes. 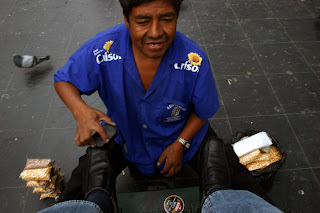 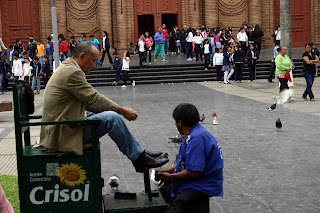 Now back to that first question about my thoughts on Santa Cruz. The city itself has little to offer the visitor [which I knew before I arrived], though the cakes in the coffee shops are delicious. Bolivia’s stark beauty lies elsewhere. For Bolivians, Santa Cruz offers the chance for a better future. And if that’s the case, then surely it must be a good place.
Posted by Ken Donohue at 10:29 AM No comments: