It was early evening when I exited the East Nanjing Road metro station. I was tossed into a disorienting mass of people. Like extras in movie flitting about, I found myself being swept along by people going in every direction; only they seemed to know where they were going.

I was in the middle of a pedestrian mall in one of Shanghai’s busiest shopping areas. Clutched in my hand was a terribly blurry map of where my hotel was in relation to the metro station, but the challenge was knowing which direction to go. It all made sense when I printed it at home, but less so now that I was standing in the map.

I couldn’t pick out any landmarks that would guide me, so I wandered down one street, and down another. After some time, I asked a police officer, who gestured in a direction but offered little more. It had been close to an hour of walking around and I realized that it was possible I’d never find my hotel.

I came up to the concierge of a hotel that I had considered booking. It was highly ironic. I showed him my now crumpled map. He entered the name of the hotel in his phone and showed me the direction. I took a photo of his screen just in case.

As I toured the darkened streets in search of my hotel, it was surprisingly quiet. A few bicycles and scooters passed by. And even when I chose to walk on the street instead of navigating the bumpy, brick sidewalks with my suitcase, I kept looking over my shoulder fearing I’d be hit by a race of cars, but the few that did pass me seemed to be in slow motion.

Down a small alley, I finally found my place of rest, and dropping my bags, I made my way to the Huangpu River and the Bund area of Shanghai. The brightly coloured lights and the futuristic, Jetson’s-like building on the Pudong side of the river dazzled. Several newlyweds had their pictures taken with the iconic skyline of the city as a backdrop.

I was up early the next morning and set off again for the riverside. There was a surreal quiet to the city. Bicycles, many with baskets attached to the front drifted along without effort. And in a country scorned for its pollution, progress was being made, I thought, as electric scooters passed by in silence. The low cloud that masked the tops of the skyscrapers seemed to dampen the city’s exuberance. Shanghai felt more like a provincial town than one of the world’s largest cities.

Walking along the river, I passed scores of people doing their morning exercises. To some, the old, stone buildings along the Bund might have had the look of melancholy, but to me there was just a restful quiet.

It was a side of Shanghai I hadn’t expected. 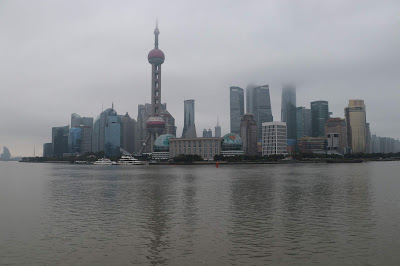 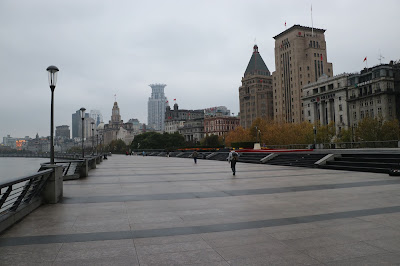