In the coming days, the United States Congress will vote on a $700 billion bailout of failed financial institutions in the U.S. That's a seven followed by eleven zeros. Hard to fathom really. So what does $700 billion look like?

For starters you could buy 2,500 Airbus A380s, the world's largest commercial airplane

You could give $100 to every person in the world

You and 3.5 million of your closest friends could travel into space on Virgin Galactic's SpaceShipOne

One could build 162 International Space Stations

You could spend the entire Canadian government's budget, and still have $145 billion in spare change left over

You could vaccinate every African child against malaria 233 times
Posted by Ken Donohue at 9:46 PM No comments:

What's with Vice-President wannabees and thier lack of foreign travel

The world is a book and those who do not travel only read one page - St. Augustine

I heard recently that U.S. Vice-Presidential candidate Sarah Palin has not travelled much outside of the United States. To be fair, I haven't spoken with Ms. Palin recently, but if she was well travelled, no one would be asking the questions. Apparently, Palin had to get a passport in 2007 to visit the Alaska National Guard in Kuwait. And while in Kuwait I doubt her itinerary allowed her to gain much insight into life in this Persian Gulf country. When asked by ABC News, she did offer that she has been to Canada and Mexico.
I can understand that someone washing dishes at the Black Dog restaurant in Wasilla, Alaska may not have the means to travel, but the Governor surely does. The same question was asked of President Bush when he was asking for the keys to the White House. And while it's a myth that he had never left the U.S. before becoming Predident, his foreign travel experience was limited. 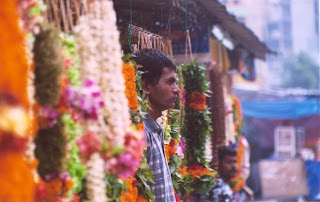 What astounds me is that some (okay many) Americans who have achieved significant standing have had little interest in exploring the world. Where is their sense of curiosity? Don't Americans realize that despite convincing themselves that theirs is the greatest nation in the world that there actually is a whole lot of greatness beyond their borders. I guess if you can go to Las Vegas and "see" Paris, Cairo, and Venice, why bother going to the real thing.
So why does all this matter? It matters because those who aspire to influence U.S. foreign policy have had very little exposure to anything foreign except for their local Taco Bell. The United States exudes great influence on world affairs, and yet its leaders haven't a clue what it's like on the other side of the world. Hitting the streets of a foreign city gives one a new perspective and appreciation that can't be gained from reading the newspaper or watching a television program. 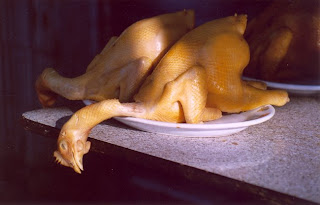 While it's difficult to get an exact figure, only 25% of Americans have a passport. And before Canadians get too smug, only about 40% of Canadians have one, and most them use it to travel to all-inclusive resorts in Mexico and the Caribbean. And the only time they leave the comfort of their resort is on an airconditioned bus that takes them to the airport.
What we need to do is start placing a greater emphasis on foreign travel. Travel shouldn't be seen as some frivilous luxury, but rather an important learning opportunity. Employers, too, need to consider one's foreign travel experience, when mulling the merits of a potential employee. Travel takes us out of our comfort zone, and forces us to make decisions in challening circumstances.
As Cesare Pavese (whoever he is) once said, Traveling is a brutality. It forces you to trust strangers and to lose sight of all that familiar comfort of home and friends. You are constantly off balance.
Be curious and get out there.
Posted by Ken Donohue at 6:42 PM 2 comments:

Geography test should be mandatory for all fliers

A friend forwarded me a news story about an Argentinian who had intended to travel to Sydney, Australia, but instead found herself on a flight to Sydney, Nova Scotia.

I have a hard time believing these types of stories, but it's not the first time someone has headed off (usually in the wrong direction) to Nova Scotia, instead of Australia.

It's great that airports have instituted a number of security measures, but maybe it's time they implemented a basic geography test for all passengers. Those not able to score at least 75% would be denied boarding and led to a room with a large map on the wall. They would not be able to leave until they had passed the test.

My sister used to give me a hard time for reading an atlas before going to bed. There's good reason an atlas should be mandatory reading. First of all, it may have prevented this woman, and others before her, from making a fool of herself. But it's also important to have an idea what the world looks like.

I find the fact that she didn't realize anything was wrong until she boarded the 50-seat Dash 8 aircraft in Halifax astounding. The article doesn't state how she travelled from Argentina to Halifax, but I know that no airline offers non-stop or even direct flights between Buenos Aires and the Nova Scotia capital. She either flew to a U.S. destination before flying to Halifax, or maybe even Toronto. In both cases, wouldn't she have known that she was travelling in the wrong direction? And wouldn't she have looked at her itinerary before going to the airport and realized what an idiot she was?

I'm just not so sure that people like this should be allowed to fly.

It was the right name but the wrong continent for a sculptor from Argentina.
Monique Rozanes Torres Aguero of Buenos Aires was daydreaming about her vacation in Sydney, Australia, when her Air Canada Jazz flight landed in Sydney, N.S., this week.
"She never thought anything was wrong until she got on the small Dash 8 in Halifax," said Christiane Tanner of Westmount, N.S., who met Aguero on the flight and has since befriended her.

"She was taking pictures out the airplane window and said to herself, 'Something is not right.' "
But rather than get upset, Aguero decided to stay and vacation in the northern Sydney - not the first time an accidental tourist has discovered the charms of Cape Breton.
The same thing happened in August 2002 to Raeoul Sebastian and Emma Nunn, both of London, England.

Sebastian and Nunn also spent their vacation in Cape Breton and became local celebrities, even being presented with the key to the city.

"She had never heard of Sydney, N.S., or Cape Breton," she said. Andrea Batten, also of Air Canada Jazz, said Aguero was a bit embarrassed about the mistake. Batten told her not to be, explaining that even Sidney, B.C., on Vancouver Island has gotten in on the act.
"We have had people land here from Germany and even recently from Czechoslovakia, when they meant to go to Sidney, B.C.," she said.

Although like the English couple she had never heard of Cape Breton, Aguero believes she was destined to go to there and is looking forward to a nine-day stay.

"When things happen, you let it happen," she said through an interpreter.
Posted by Ken Donohue at 8:19 PM No comments:

As you've probably noticed white man walking has been on a bit of a sabbatical. I blame child rearing on that.
Carrie asked me the other day when our election is? With all the talk of Obama and Pailin, one could easily forget that indeed there is a federal election campaign underway in Canada. For the record, Canada's 40th general election will take place on October 14th. "So, you mean our campaign is just six weeks long, and the U.S. campaign goes on and on and on," she mused. Yes, the Americans campaign for 13 years for a presidential term that lasts just four years. Apologists of course would say that's what democracy is all about. I'm not so sure.

What's even crazier is the amount of money that is raised and spent during the U.S. campaign. Earlier this week, it was reported that Barack Obama raised a record $66 million in the month of August. And since entering the race in early 2007, he raised more than $450 million. One political analyst suggested that Obama and McCain will spend $240 million EACH in the next seven weeks leading up to the election. Let me put this into perspective. The budget of the west African nation of Togo, which I mentioned in a previous post, has annual revenues of $481 million and yearly expenditures of $427 million*.

I suppose for one of them it may be money well spent. But consider for a moment that during the four-year term, the President will be in the White House for 1,460 days. And if Obama becomes President and ends up spending the whole wad he raised, his stay at the White House will have cost more $300,000 per night. 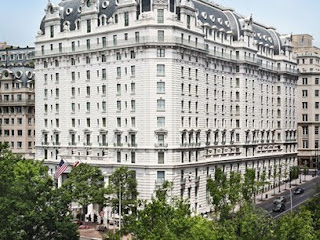 In contrast, he could stay at one of Washington’s most expensive hotels, The Willard, for much less. The Washington Suite for example is priced at $4,000 per night, although I’m sure he'll probably get a long-stay discount.
The Suite comes with an entry foyer, powder room, living room, dining table for eight (I’m sure for State dinners, a ballroom downstairs could be rented), two plasma screen TVs, two cedar closets, hair dryer and ironing board. Wireless Internet is available for an extra charge. Imagine paying $4,000 a night for the room and being charged for Internet access, which is almost as absurd as spending hundreds of millions of dollars on an election campaign. Obama would gain some inspiration as the Suite has a view of the Washington Monument and Pennsylvania Avenue.

Now there is some precedent here, because at least two presidents lived at The Willard for a while -- Lincoln in 1861 because of assassination threats and Calvin Coolidge in 1923 while waiting for Warren Harding's widow to pack up and move out after her husband died in office.
Posted by Ken Donohue at 8:48 AM 1 comment: