Legacy of the printed word

My grandmother died six years ago. She was 84. It was one of those days that leave you with wonder. She died the same day that we learned my wife was pregnant with our first son. The sorrow of death mixed with the joy of new life.

I often think about my grandmother, and wish she were still around. She was a source of quiet inspiration. It wasn’t so much what she said that counted, for she would never have been the loudest in a group, but rather how she led her life. She was a writer—mostly of poetry and short stories.

My mother gave me a small suitcase yesterday. It was decades old and sturdy. Inside were poems and stories written by my grandmother. Most of the pages were typewritten (she grew up in a period before home computers), and many had been yellowed by time. I pawed through the pages and couldn’t help but marvel at the legacy that my grandmother had left. Her life. Her memories. Her most cherished thoughts were contained in this one little suitcase. As I read her work it was as if she had come alive.

I imagined her sitting in her kitchen or garden and being inspired by the simple things that life gives us. She lived most of her life in the Cowichan Valley, on Vancouver Island, and wrote about her community, her garden, the seasons, and her loving relationship with my grandfather, I suspect. She wrote about a once magnificent, turned run down hotel in Brandon, Manitoba. And about leaving Cuba, a place my grandparents visited often, long before it became the tourist mecca it is today. And she wrote simply about the flowers in her garden.

Her musings spanned the last half of the 20th Century, some of which were published in newspapers and magazines. In 1995, she published a book of poems called, Through Cedar Portals.

Little would she have known that years after death, her grandson would find such delight in this treasure trove of memories. I hope you do as well. Here are a handful of her poems.


The Writer of Hate Literature
Long ago he fed a ribbon of venom
into his typewriter, and each word
he clacks spells HATE!
Twisted mouths seize his wild-eyed words
writhe them into different shapes
and spit them under the roof
of fanaticism, where they quiver
in electric air and re-form to spell
HATE!
And in the end
when his slimy ribbon-trail has led
beneath the last grey stone
will the chiseled words
REST IN PEACE?


Friends
Over the years
the climate of our friendship
has changed;
now I can almost
warm my hands
on the letters
of your name


Anniversary
Sometimes it seems
you know my thoughts
and often
I too hear unspoken words
in the comfortable silences;
this lovely magic is
elementary to us now
and over the years
our thoughts have tangled—
it would be hard to extricate
mine from yours
and anyway
I much prefer
the magic

B.R. Donohue, 1980
(on the occasion of my grandparent’s 40th Wedding Anniversary)

Life lessons from the seat of a bicycle

When is a bike ride more than just a bike ride? When it comes with life lessons.

I am taking part in the RBC GranFondo Whistler, a one-day, 120 km cycling event from Vancouver to Whistler. On the surface that may not sound all that significant, until you realize that I have never participated in something of this nature before. In fact, I would hardly call myself a recreational cyclist.

I was forced to take up cycling a number of years back when the bus drivers went on strike and I needed to get to work. So, I dusted off my father-in-law's mountain bike and started pedalling. I continued biking for a while after the buses began operating again, but stopped when we moved further away. Every once in a while I will take the bike for an afternoon spin, but that has been the extent of my cycling.

When I learned of the GranFondo Whistler, I was attracted by the challenging nature of the ride. And I knew that with hard work, preparation, and a determined spirit, it was something I could accomplish. As an added challenge I decided to join Team Diabetes, and had a goal of raising $800 for the Canadian Diabetes Association. Thanks to the generous support of friends, professional colleagues, and family, I have now reached that goal.

Crazy. Lunatic. These are words that some people have expressed when they learned that this neophyte would be cycling to Whistler. Not that I needed any reminding, but my mother-in-law had to tell me that after Squamish it was all up hill. Indeed it is. An appropriate metaphor, perhaps, for life in general, which often isn’t easy.

“I guess, you can stop if it gets too difficult,” she continued. I told her I wasn’t a quitter, and I would finish even if it took all day. “You’re so positive,” she ended.

I don’t know any other way than to be positive. Besides, my parents instilled in me a strong work ethic, where quitting isn’t an option. While I don’t remember my mother or father saying as much, there was an unspoken sentiment that if you start something, you better finish it.

I recently began training, and one day while riding, a stiff head wind was slowing me down, and I felt as if my legs wouldn’t pedal anymore. I cursed and wondered why I signed up for this. But I pushed on, turned a corner and I then I felt like I could ride forever. Cycling gives one a lot of time to think and contemplate, and it was at that moment, when I thought I couldn’t keep pedaling that I realized that this is more than just a bike ride; there are important lessons to be learned. It’s about setting a goal and having the resolve to overcome adversity, regardless of the challenges trying to slow us down.

When I told my five-year old son that I was going to ride a bicycle to Whistler, his eyes grew large, and he said bluntly, “that’s a long way.”

It is my hope that I can inspire confidence in my two young sons, so that they too can dream and not be afraid to accept challenges. I want them to know that success comes from not always taking the easy road, but rather setting goals and being disciplined to see them through.

Sure, it would be easier to just sit on the couch than climb onto my bicycle, but what fun is there in that--always watching someone else do something. I am under no illusions that cycling to Whistler will be difficult, maybe even grueling at times, but I relish the challenge. In fact, knowing how hard it will be pushes me to work even harder, as I train and prepare.

Life shouldn’t be about regrets, and wishing you had done something. Maybe there’s something that you have always wanted to do, but thought it was too challenging. With the right motivation, discipline, and preparation, nothing is too difficult.

Crazy? Maybe, but knowing that life lessons are being learned and passed on to my sons, makes pedaling into that headwind all the more easier.
Posted by Ken Donohue at 11:22 AM 1 comment:

I was on an Austrian Airlines flight recently, and while reading the inflight duty free catalogue, I couldn't help but wonder about the last page. On the top was a bold header with the words: Good and Tasty. Below it were pictures of chocolates and cigarettes for sale. Now, let's presume that chocolate is tasty, because I don't think even the most hardened smoker would say that cigarettes are tasty, though maybe. Does this then mean that cigarettes are GOOD? Apparently so, according to Austrian Airlines.

This got me wondering about the smoking rate in Austria, which maybe not surprising considering the national airline thinks cigarettes are good, is quite high when compared to other European countries.

The data below was gleaned from the World Health Organization's, European Tobacco Control Report, 2007
http://www.euro.who.int/Document/E89842.pdf

Between 2002 and 2005 (the last year data was available), the number of smokers, both male and female, actually increased in Austria, to more than 40% of the population. This is remarkable, because except for Ukraine, every other European country sampled saw declines in the number of people that smoke. While 65% of Russian males smoke (the highest in Europe), women in Austria are tops in Europe, with 40% of the female population there smoking.

Curious as to which country has the lowest number of smokers? Thought you might be.

Sweden has the lowest percentage of males smokers at 16%, while Kyrgyzstan and Moldova report only 5% of females that smoke, though men in those countries more than make up for it as half of them enjoy their cigarettes.

And how might all of this compare here in Canada? Well, according to a 2009 report by Physicians for a Smoke-Free Canada, just 18% of Canadians smoke.

Given all of this, it would seem to me that Austrian Airlines should probably do an edit of its duty free catalogue, because while it probably makes a killing (pun not initially intended, but it does work well) at selling cigarettes, they are neither tasty, nor good.
Posted by Ken Donohue at 8:38 PM 1 comment:

Ever wonder how the world would be different had events in history been different?

You know, what if the Campanile, or Bell Tower, in Pisa didn't lean. Pisa would just be another quaint, yet random Italian city. Surely, it wouldn't have the same notoriety that it does.
And what if Elvis hadn't died at the age of 42. Would he still have been making music into his 60s? And what would that music have sounded like at the end of the 20th Century?
Even the marketing folks hired by the National Hockey League, had a what if moment. In their current series of TV spots, they show a classic moment during a Stanley Cup playoff game, and then reverse the footage, ending with a, What If...tag.
In one, the Boston Bruins are playing the St. Louis Blues in the 1970 Cup finals, and we see Bobby Orr's now famous overtime goal in which he is flying across the crease after scoring the game winner, giving Boston its first Stanley Cup in 30 years. The spot ends with, What if Bobby didn't fly? History will be made. 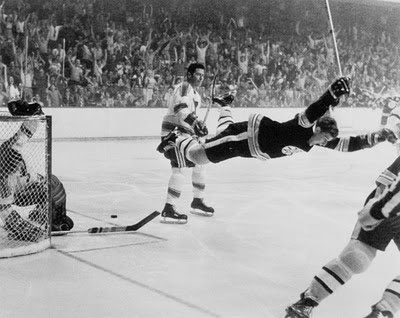 You can view the spot and others (as well as some parodies) here:
http://www.youtube.com/watch?v=EUnS5gq0BZ4
During my recent travels to Israel and Palestine, I mused over some of those, what ifs.
What if 6 million Jews hadn't been exterminated by the Nazis?. Would there have been the same guilt and impetus by the world community to create a Jewish State (Israel) in Palestine? And what if the Arab armies that attacked Israel in 1948 weren't so inept, and had in fact defeated the Israelis as they boasted they would? Of course we can't rewrite history (though many try, or at least write it differently) But I wonder how different the region be today, had events been different? 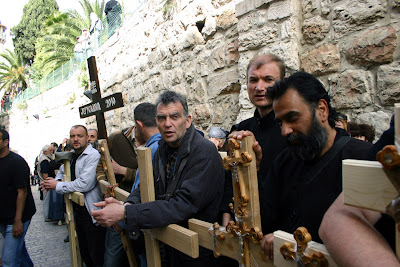 Being in the Holy Land and all, I was also wondering how different the world would be had Jesus not been crucified. I mean the cross or crucifix plays such an integral part of Christian imagery. Would the religion have gained such a following had Jesus just died of old age. Maybe it wouldn't have changed the course of Christianity, but I wonder. Imagine how different churches would look. And what of the ubiquitous crosses that many women wear - part statement - part jewelry.
Maybe you have your own, what if moments. 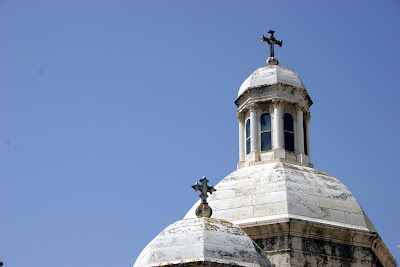