Time to start thinking outside the box

The other day I was at a workshop, and one participant used the expression: think outside the box twice during a brief introduction that lasted no more than a minute. I cringed.

I was surprised to learn that while the phrase has recently become common jargon in the workplace, it apparently had its origins in the United States in the late 1960s.

Remember that once common phrase, it's not rocket science. Well, have you considered that maybe rocket science isn't that difficult after all? Okay, it probably is, but let's pretend it's not.
Posted by Ken Donohue at 3:23 PM 1 comment:

What time is it?

On Sunday evenings, my father-in-law can be found dispensing helpful information to wayward travelers, as a green coat volunteer at Vancouver International Airport. He loves the job and takes great pride in it, especially last Sunday when he told me that he was the ONLY green coat working the ENTIRE airport. Imagine the responsibility.

He’s had a few fleeting brushes with fame—Renee Zelwegger, Eric Stoltz, and Daniel Sedin, or was it Henrik Sedin (apparently, only their mother can tell the difference). The stories he often shares are usually ones about confused passengers who are convinced that someone from their hotel or cruise line, or tour company is supposed to meet them at the airport, when it turns out that no such arrangement had been made. Conversely, there are stories about lax (or lazy) tour operators who are late picking up passengers, creating unnecessary anxiety for many visitors. But one story still sticks with me.

A confused looking woman came up to my father-in-law, and asked, “Where do I find Air New Zealand’s nine-thirty flight to Auckland?”

“But my itinerary says nine-thirty. See, right here…it says 1930,” she continued, showing her itinerary to my father-in-law.

He had to tell this distraught, teary-eyed woman that 1930 is not 9:30 PM, but rather the 24-hour clock equivalent to 7:30 PM, and that she had indeed missed her 14-hour flight to New Zealand. Fortunately, someone was still at the Air New Zealand ticket counter, and my father-in-law directed her there for assistance.

An amusing tale of course for those of us who have never been in such a predicament, but it begs the question, how many of us are familiar with 24-hour time, and is it being taught in school, or is it simply dismissed as some obscure military practice? 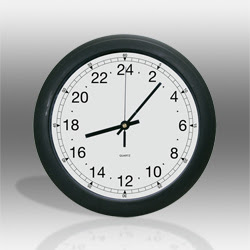 The 24-hour clock has been used for centuries, and is a convention of time keeping in which the day runs from midnight to midnight and is divided into 24 hours, indicated by the hours passed since midnight, from 0 to 23. It is the most commonly used time notation in the world today. The day begins at 00:00 (midnight) and the last minute of the day is at 23:59. Its use is intended to prevent any ambiguity.
If 24-hour time isn’t being taught in schools, then maybe it should.
Posted by Ken Donohue at 1:55 PM 4 comments:

What's in a name?

Given the state of the auto industry, it’s probably not surprising that General Motors gave up its sponsorship of Vancouver’s GM Place, which is now the Rogers Arena. This begs the question, if GM Place was known as The Garage, what will the Rogers Arena become? The Cell? The Net?

Naming rights for stadiums and arenas is a large revenue stream, which is why most in North America now have corporate names attached. In fact, all but three National Hockey League arenas have naming rights. The three hold outs include: Joe Louis Arena (Detroit), Nassau Veterans Memorial Coliseum (Long Island, New York), and Madison Square Gardens (New York). Of the four major professional sports leagues in North America (hockey, basketball, NFL football, and baseball), football is the one where more of the stadiums are not corporately named. There, 13 of 31 stadiums don’t have naming rights, compared to five basketball arenas and seven baseball stadiums.

Some stadiums and clubs are so steeped in history that it would be sacrilege to sell naming rights. Take the New York Yankees for instance, who even after building a new billion dollar stadium, still call it Yankee Stadium, and vow to never sell the name, despite purported offers.

If you want to know, the money is in the bank. That’s because more banks and financial companies have their names on arenas than any other industry, including: Scotiabank Place (Ottawa), RBC Center (Raleigh, NC), Bank Atlantic Center (Miami), and Lincoln Financial Field (Philadelphia). Some, though, have tried to maintain a sense of history. When the venerable Boston Gardens was closed, the city’s new arena became the uninspiring Fleet Center (named after a bank), but the world doesn’t stand still, and the arena is now known as the TD Gardens. Yes, still named after a bank.

Some names though just shouldn’t be put on an arena or stadium. Like in Phoenix, where you can watch a hockey game at the jobing.com Arena. Or in Cleveland, home to the Quicken Loans Center. Another that I was never fond of was the National Car Rental Center in Miami. It’s now named after Bank Atlantic. And in Minneapolis, you’ll find the ever succinct Mall of America Field at Hubert H. Humphrey Metrodome

All of these corporate names got me thinking, where would be the best place for fan appreciation night? In Denver or St. Louis, you’d score a six-pack of beer, compliments of Coors and Anheuser-Busch. If you were watching football at Heinz Field, in Philadelphia, you’d leave with a bottle of ketchup. In Phoenix, you could get a job thanks to the folks at jobing.com (which would be good for some people). If you’re after a flight somewhere, then you’ll want to catch a game in Toronto, Dallas, Miami, Chicago, or Phoenix. If reading is your thing, you might get a year’s subscription to the St. Pete’s Times newspaper, in Tampa. Need new tires? Then head to the Bridgestone Arena, in Nashville. But the best place to score at fan appreciation night would be at the Honda Center, in Anaheim, where you’d get a new car. Beats some razors and shaving cream at Gillette Field, near Boston.

Posted by Ken Donohue at 2:03 PM No comments:

You know your child is getting older when...

With apologies to parents with children older than mine...

I know my son is getting older when...
- His Mother and I accompany him to his Kindergarten orientation
- He calls us Mom and Dad, instead of Mommy and Daddy
- We now have two pets named Casper and Bluey (fortunately, they are just fish)
- The older girl next to us knocks on our door and asks if Jack can come out and play

What next...the keys to the car? 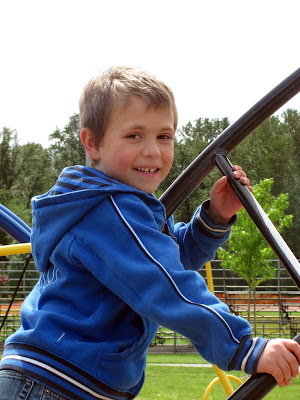 Okay, I'm no Lance Armstrong, but I'm starting to feel more like a real cyclist. I wonder, has Armstrong ever fallen off his bike (twice), because he couldn't unclip his shoes from the pedals in time?

I recently got a new road bike, which is another term for a bicycle with skinny tires and a hard seat. For several years now, I have been using my father-in-law's old mountain bike, and while I never did well in physics, it was easy to understand that cycling 120 km to Whistler would be better served with a bicycle that didn't have big knobby tires, like the kind found on jacked up pick-up trucks.
I've never worn the spandex get-up that those real cyclists wear, and so my wife joked that for the ride to Whistler I'd probably show up (and embarrass myself) wearing shorts, a t-shirt, and sneakers. And what would be wrong with that? "You know, I'll only laugh at you for about 10 minutes if you get the riding gear," she mused.
When I was getting the bike, the guy at the shop said you'll need some pedals with clips for your shoes. Shoes? I thought I was just going to wear my sneakers. I now have shoes. And then the guy said I can't wear baggy shorts with a bike like this. My shorts weren't even that baggy...not like those young punk kids with their baggy pants. Who knew there was such a clothing etiquette to cycling? I figured I'd just jump on and pedal away.
After riding for a couple of weeks with my "baggy" shorts, and at the urging of my wife (she just wanted her 10 minutes of laughter, I'm sure), I finally bought a cycling shirt and spandex shorts, which nicely come with some padding in a very important place.
The other day I slid into my shorts, pulled on my new shirt, clipped my shoes into the pedals and hit the road. It was the first time that I kind of felt like one of those real cyclists. Maybe the same way the bowler, who has his own shirt, shoes and bowling ball, feels.
My wife didn't even laugh when she saw her spandex-clad husband climb on his bike, though she may have snickered to herself. 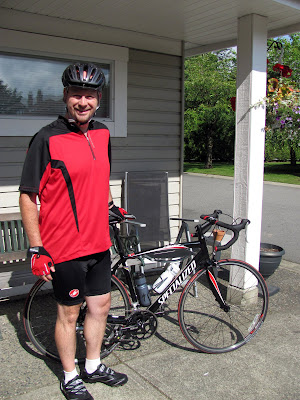