I know my place 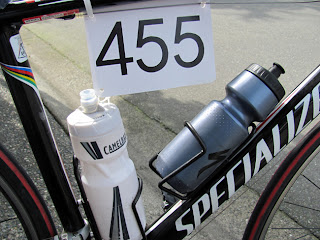 “Daddy’s going to be in a bike race,” my wife said to our six-year old son, Jack, the other day.

While it was indeed a race—six times around a 10.5 km course—I use the term “race” loosely, because I had no pretence that I was really racing myself.

“Do you think he’ll win,” Jack replied to his mother.

“But why not? What if he tries really hard,” Jack said as if willing me to win. And that’s what I like about young children. Anything is possible.

Later that night while putting Jack to bed, he looked at me with me sincerity and said, “Good luck with the race. Try hard and make sure you pass 10 people.” It was nice that the expectations had been tempered. Daddy won’t (I mean can’t) win, but maybe he can pass 10 people.

While waiting at the start of the race, told a friend this story, and then I started sizing up the competition. There were about 70 riders in my category of unlicensed “racers”. Looking around at the fit and lean cyclists, with their three and four thousand Dollar bikes, I turned to Tom and said, “I don’t even think there are 10 people here that I can pass.” It would have been like showing up at a Formula 1 race with my Toyota Corolla.

A couple of seconds later, Tom looked at me and said, “We’ve only been a block and we are in last place already.”

A few hundred metres along, we started down a small hill through the University of British Columbia, and onto Southwest Marine Drive, and it was at that point I thought of Jack’s words of encouragement—try hard and pass 10 people. I knew I couldn’t catch that many, so I dashed ahead of a couple of people and never looked back.

On my way up the course’s only hill for the first time, about six of the elite racers passed me, and when a course volunteer shouted words of encouragement to me, I pointed to the riders that had just passed me and jokingly said, “I must be in seventh place.”

While I tried to keep my speed over 30 km/h along the flat stretches, a pack of the elite riders—20 or 30 at a time—zipped passed me at 40 km/h, maybe faster. The sound they made was not unlike what I imagine a swarm bees to make. Impressive on a number of levels.

It took me a little more than two-and-a-half hours to complete the 63km. When I got home, Jack asked me if I came in last place. Funny, how the expectations had fallen even further.
Posted by Ken Donohue at 9:34 PM 2 comments: