My mother, or father, or maybe some other wise sage used to tell me that Rome wasn't built in a day. Patience, Ken, patience. Maybe so, but did you know the Eternal City, as it is known, came into being on this day 2,762 years ago? Hard to imagine really that in 44 BC, the city's population had swollen to more than one million.

The birth of Rome reminded me of my own trip to the Italian capital 16 years ago. I was travelling through Europe with a friend, and as our travels drew us nearer to Rome, we kept hearing horrific tales from other travellers about their experience of being pick pocketed and robbed in the city. It seemed as if everyone we met was fleeing Rome, much as the populous would have in the year 64 when Rome burned.

Undaunted, we were determined to see this historical city, and we weren't about to let a pack of lowlife, thieving miscreants ruin our visit. As our train neared Rome's Termini Station, we decided to carry only one large backpack each, instead of the extra day pack that we usually carried. With a sense of excitement and some anxiety, we stepped onto the station platform, and were prepared for the roving gangs.

We spent a couple of days in Rome, dazzled by the incredible sights--the Colisseum, the Forum, the Pantheon, and Spanish Steps, the Trevi Fountain, and the Fountain of the Four Rivers--yet not once did we feel threatened. The only unnerving thing was walking past the machine gun toting Carabiniere, which occupy most street corners in the city.

Maybe we were lucky not to have had our pockets picked, or maybe because we were prepared, the thieves were lured to easier targets. Whatever the case, Rome still stands as one of the magnificent cities I have visited.

So, the other day I was taking the bus to the airport in Vancouver (actually I had to take three buses, but I'll save discussion of that for another time), and a young couple sat next to me, each carrying a large pack. I imagined a trek to Asia or Europe. Instead they were headed for a camping trip in Hawaii, the "Big Island" to be precise. I told them I was going to Maui.

It was a beautiful spring day, and the young guy was chatting to a traveller from Germany, when he announced that he hoped it would start raining in Vancouver. The sentiment being that he'd basking in the sun, while Vancouverites would be dripping in the rain.

"I tell him it's a very spiteful attitude," his girlfriend said, turning to me.

"And you never know it could be raining in Hawaii," I replied.

In fact, the wettest place on earth is located on the Hawaiian island of Kaui. It is here, on Mt. Wai'ale'ale, where more than 486 inches of rain falls each year. Let me do the math for you--that's 40 feet of rain.

I think Hinakuluiau, the Hawaiian goddess of rain, was listening in on that conversation on the way to the airport, and she is one scorned woman. In the past three days we have only seen the sun for a fleeting moment before the trade winds blew in the clouds. It has rained for much of the day.

If I knew how to reach Hinakuluiau, I would repent and tell her that except for the ravaged farmers of central Australia, where water hasn't fallen from the sky for several years, I will never wish rain on anyone again.

As I hear the rain dripping from the palms and hibiscus, I wonder how that young couple is doing in their tent. I imagine her cursing, and blaming her boyfriend's spiteful attitude for unleashing the wrath of Hinakuluiau.

In the meantime, I'm trying to find out how I can reach the Hawaiian sun god!
Posted by Ken Donohue at 10:13 PM No comments:

The sacrifices we make 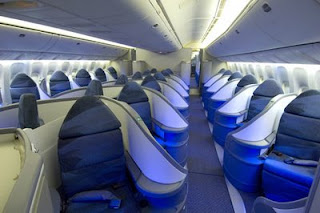 "Do you offer upgrades to passengers when it's their birthday," I casually asked the Air Canada check-in agent, yesterday.

The agent asked my four-year old son if it was his birthday. "No, it's Daddy's birthday!"

Right son, and your hardworking Daddy deserves to be sitting up front.

As we unloaded the 16 pack mules that we had brought to the airport to carry our bags, the agent looked at me and exclaimed, "you're the transplant guy!"

Transplant Guy? Hmmm...I think there must be some super hero potential there. "Have no fear...Transplant Guy is here!"

I didn't tell her that what I really wanted was for me and my brood to be transplanted from economy to business class.

While it would probably make for a better story if I told you that random people always called me Transplant Guy, turns out the agent had a kidney transplant about 15 years ago, and knows me from my work.

"As for that question you asked me at the beginning, I'll see what I can do," she said, as she finished tagging our bags and handed our boarding passes back to us.

As he always does, Jack wanted to stop at the children's play area before heading to our gate. He soon latched on to a girl, about a year or two older than him. After chasing her around the play set, he ran over to me and said he had a girlfriend to play with. We told him that he should ask for her name, but he kept calling her, girlfriend. Even when he went to the bathroom, he announced to everyone with ears in the US departures area, "I'll be back girlfriend, I'm just going to the bathroom!"

We strolled over to the gate around the time boarding was to supposed to commence, but we found out that most of the passengers were already on board. "Mr. Don-a-ho," the gate agent said. "We had a call about an upgrade, and we have one seat available in business class for you."

Oh no, not one seat, I thought to myself. Here was an opportunity for an upgrade and my family was cramping my style. But really, how could I sit (or should I say lie) up front in a nice, comfortable lie flat seat, when Carrie and the kids were slumming it in the back.

I could hear these words in mind: Mr. Donohue, would you like some champagne? What about some brandy after dessert?

In the end, I proffered a kind thank you, declined the offer, and followed my family to row 29, where they keep the cattle. Next to us was a petulant toddler screaming his face off for reasons unknown to everyone, including his poor mother who tried to hold this writhing kid.

Ah, the sacrifices I make for family harmony, I thought, as the devil kid next to us stared at me between his temper tantrums.
Posted by Ken Donohue at 7:12 PM 1 comment: