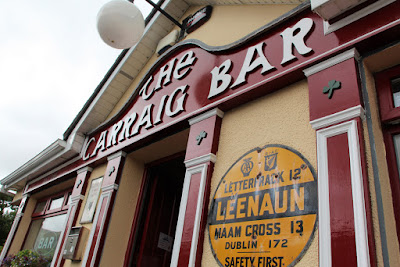 Near the Irish village of Leenaun, in the Connemara region, our hungry stomachs stumbled upon the Carraig Pub, with its puncy red and white sign. We stepped inside the small and inviting pub, and were warmly greeted by a man, who I first thought was the owner. Philip was his name. He wore a white beard and a weathered-look that gave the appearance of an old salt. I figured he’d spent his entire 80 years living in this village, next to the sea.

Like a layer of freshly fallen snow, dandruff flakes covered the collar of his black suit jacket, which I imagined was the only one he owned. Part of his striped dress shirt was untucked. Behind him was the barman, a trunk of a man, who I gathered to be in his late 60s. I pictured him knocking down people on the rugby pitch in younger years. 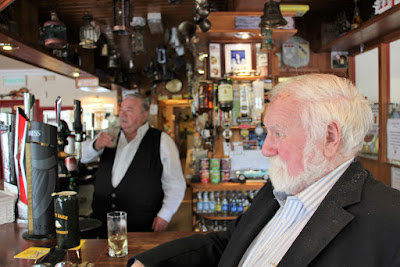 In a way that is comforting, the menu was unpretentious. The kind of meal your grandmother would make. I ordered a tuna sandwich. My mother and sister, the vegetable soup. Someone, who I guessed to be the barman’s wife took the order slip and walked back to what looked like the family’s living area. An Irish or English soap opera—I wasn’t sure—played distractingly on a TV in the corner.
After Philip took a few sips of what I could only imagine was a noon-time nip of Irish whiskey, he came back over, and we started up a conversation.

I was wrong about him spending his entire life in the village. With little prospect for work, he, like so many millions of other Irish before him, left Ireland on a ship and went to New York in 1962. He worked hard for 40 years in America for a good pension, as he put it, and then followed his heart back to Ireland. “You never know when it will end,” he said, looking skyward. It was a bit of poetry. He wished for the beginning and end of his life story to play out right here in this small village, where pleasures are simple and friends gather round and swap old tales.

If you ever find yourself in Leenaun, stop in at the Carraig, and say, hello to Philip.
Posted by Ken Donohue at 8:54 PM 2 comments: